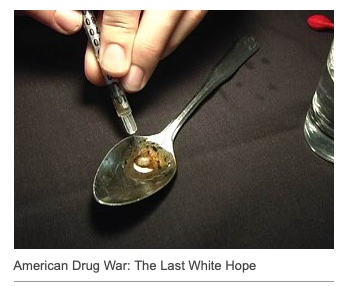 Six years and countless billions of dollars into the global war on terror, it's clear we're in this thing for the long haul. Fortunately for our current policy-makers, the United States has a little experience waging perpetual war against nebulous foes. Take our War on Drugs, now 36 going on 37, which is the perfect example of a war without end, one waged by an ideologically entrenched government against multiple invincible enemies. Each year the budget for this war grows larger, and each year it becomes more profitable for those who support it. Turns out there's money to be made in selling supplies to people bringing drugs into this country and in incarcerating those unlucky enough to get caught holding them.

This is the tangled world director/writer/former Austinite Kevin Booth dives into with his new documentary, American Drug War: The Last White Hope, which is having its Austin premiere this Thursday, Dec. 20, at Antone's before screening on Showtime in March. The film is a two-hour trip through the looking glass of American drug policy, taking viewers from the crack-strewn streets of Los Angeles to the meth-fueled prisons of Arizona, from the halls of Congress to Booth's own family kitchen, in an effort to make sense of a national drug policy that manages to cost $60 billion a year and imprison 1 million nonviolent offenders yet has no discernible effect on the sale or use of drugs. Along the way, Booth introduces us to soldiers from all sides of the war (any movie that features interviews with comedian Tommy Chong, a former drug czar, and the founder of the Bloods street gang is doing something right) and takes us inside the vast, corporate prison-industrial complex/CIA-funded machine profiting off its proliferation.

If you're beginning to suspect American Drug War is some kind of conspiracy movie (a suspicion that won't be allayed by the fact that Thursday's premiere is being hosted by Alex Jones), Booth assures me the facts are much more harrowing than any theory could ever be. While shooting the film over 41/2 years (during which time he saw several friends and family members die as a result of their own legal addictions to alcohol, tobacco, and over-the-counter medications), he says, "I learned that you don't need to use conspiracy theories to expose what's going on with our government or our world these days."

"Most generations have their own war," he continues. "My parents fought in World War II, but what's going on with this new era of corporatism really is our generation's war. When private corporations become responsible for imprisoning us, sickening us, looting us, I think it's a war." In other words, the Drug War now exists on three fronts: the war against the distributors, the war against the users, and now the war by concerned Americans against government institutions and corporate entities profiting off the casualties of fronts one and two. Who needs bin Laden when we've got ourselves to fight?